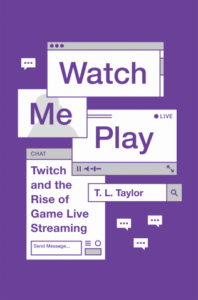 Out now from Princeton University Press.

T.L. Taylor is Professor of Comparative Media Studies at MIT and co-founder of AnyKey, an organization dedicated to supporting and developing fair and inclusive esports. She is a qualitative sociologist who has focused on internet and game studies for over two decades. Dr. Taylor’s research explores the interrelations between culture and technology in online leisure environments.

Her book about game live streaming, Watch Me Play: Twitch and the Rise of Game Live Streaming (Princeton University Press, 2018), is the first of its kind to chronicle the emerging media space of online game broadcasting and won the American Sociological Association’s CITAMS book award. She is also the author of Raising the Stakes: E-Sports and the Professionalization of Computer Gaming (MIT Press, 2012) which explores the rise of esports and Play Between Worlds: Exploring Online Game Culture (MIT Press, 2006), an ethnography of the massively multiplayer online game EverQuest. In 2012 Princeton University published her co-authored book on conducting ethnographic research in online multi-user worlds, Ethnography and Virtual Worlds: A Handbook of Method.

Dr. Taylor is a highly sought after speaker. Both the White House and the International Olympics Committee have invited her to special summits focused on gaming. And journalists for the New York Times, PBS, the Los Angeles Times, BBC, CBC, and many others often reach out to Dr. Taylor for her expertise.

She also currently serves as a member of Twitch’s Safety Advisory Council and on the editorial boards of Social Media & Society, Games and Culture, American Journal of Play, and ROMChip.

You can find more info about her and her work at tltaylor.com.